“…and a Sixpence in her Shoe”

↓ jump to all ordering options ↓

JQ is joined by Elizabeth Boyle, Laura Lee Guhrke, and Stefanie Sloane to bring you the tale of four friends from Madame Rochambeaux’s Gentle School for Girls who find an old sixpence in their bedchamber and decide that it will be the lucky coin for each of their weddings. 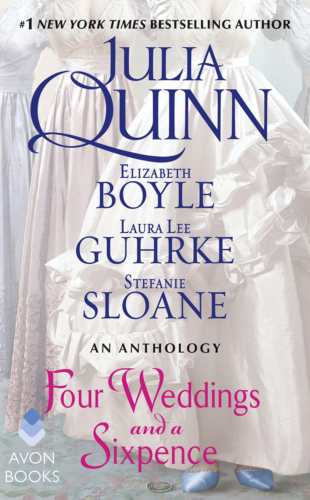 Add this book to Goodreads:

But it was clear from their faces that Anne, Cordelia, and Ellie were not joking. Bea could only stare, first at them, and then at the coin that had been laid in the palm of her hand.

Then back at them, because really, they were the ones with the ability to form thoughts and take action and change the future. Not the coin.

“You made a vow,” Cordelia said.

“We were children!” Bea looked over at Ellie, hoping to find some spark of sanity in her eyes.

But Ellie was nodding right along with Cordelia. “It worked for us, Bea. You should give it a try.”

“I cannot believe the three of you think that this sixpence—” Bea thrust her hand forward, as if they didn’t already know precisely what she was holding. “…that this… this coin has supernatural powers.”

“I’m not saying it does,” said Anne, whose recent marriage to the Duke of Dorset made her one of the highest ranking ladies in the land. “I’m just saying I’m not convinced that it doesn’t.”

“I had wretched bad luck when Lawrence had it in his possession,” Ellie admitted.

“I still can’t believe you gave it to him,” Cordelia scolded.

“He picked my pocket!”

“I can’t believe you married a pickpocket,” Anne said, shaking her head. Her expression was admirably grim, but she managed to keep it that way for only a second before a snort of laughter burst through her lips.

“Don’t say that I could have my own pickpocket,” Bea warned her. Good heavens, her friends had lost their minds. Was this what love did to a person?

“You have to take the sixpence,” Ellie said.

Bea’s gaze dropped to the silver disk in her hand. “I believe I’ve already taken it.”

“You have to use it,” Ellie clarified.

Bea rolled her eyes. “Most people would agree that the normal use for a sixpence is to spend it.”

It was a collective shout, from all three of her friends. She looked at them, still dressed in their elegant gowns. Ellie was in her wedding dress for heaven’s sake. Lawrence was probably pacing a trail through the rug in the sitting room on the ground floor, waiting for her to come down so they could leave for their honeymoon.

Instead they were holed up in a bedchamber, arguing over this nonsense.

Cordelia reached out and folded Bea’s fingers over the sixpence. “Put it in your shoe.”

“It’s the only way we’ll believe you’ve done it.”

“You do realize I could simply remove it as soon as I’ve gone?”

“But you wouldn’t,” Ellie said, “because you don’t break promises.”

Bea opened her mouth to argue, then groaned. They had her there. This was the problem with friends. They knew you too well.

Anne looked up briefly from the gloves she was sliding on to her hands. “So you say.”

“You should reconsider,” Anne said with a frank shrug. “The marital state has a great deal to recommend it.”

“I might agree,” Ellie said pertly, “if I ever managed to leave this room to join my new husband.”

“I’m not stopping you,” Bea pointed out.

But Ellie was undeterred. “I’m not going anywhere until you put that bloody coin in your shoe.”

Bea sighed. There was no winning this one. Not with all three of her friends staring her down like a tribe of lost gorgons. She turned the coin over in her hand a few times. “Well,” she said thoughtfully, “I suppose it counts as something old.”

Anne grinned and tapped herself on the chest. “And I’m something new.”

“I’m a new duchess,” she explained.

“You’re stretching this old wives’ tale for all it’s worth, aren’t you?” Bea remarked.

Ellie waggled her hand in Bea’s face, her sapphire betrothal ring glinting in the fading daylight. “And I’ve got something blue.”

“It all fits,” Anne said. “It’s brilliant.” She pointed to the coin, then to herself, Cordelia, and then Ellie as she said:

No one needed prompting to finish with: “And a sixpence in her shoe.”

Well, except Bea. She kept her mouth shut the whole time. But in the end, she could only shake her head. “I can’t win, can I?”

“You’ve become quite the duchess,” Bea grumbled, plopping down on a nearby chair so she could remove her slipper.

“She was always this bossy,” Ellie said. She flashed a smile at Anne which was instantly returned. Bea couldn’t help but smile a little herself, even as she sighed in defeat. This, she thought, was the very definition of friendship. The shared laughter, the smiles that didn’t have to be hidden behind a hand. The knowledge that if she ever needed anything, ever found herself alone or adrift…

She would never be alone or adrift. That was the point.

Bea didn’t believe for one moment that a sixpence could help a lady find a husband, but she did believe in friendship.

She put the coin in her shoe.

Bea frowned and shook her foot at the ankle, hoping no one would notice the strange hopping gait she’d adopted for the last ten or so paces. One would think that a coin —especially one so flat and worn down— would be nearly impossible to feel underfoot, but no, it felt like there was a bloody pebble in there, wedged between her stocking and shoe.

She felt rather like the Princess and the Pea.

Except she wasn’t a princess. Nor was she a lady or an honorable or anything other than the very ordinary Miss Beatrice Mary Heywood, orphaned daughter of the late Robert and Elizabeth Heywood, devoted and grateful niece to the Misses Calpurnia and Henrietta Heywood.

She lived in a very ordinary home, with three floors, two servants, and one garden. She liked to read. She liked to knit. All very ordinary pursuits. In fact the only extraordinary thing about her (besides her circle of dear friends, which —rather improbably for a young lady of her station— included a duchess, a countess, and the daughter of an earl) was her passion for the skies. It wasn’t a terribly ladylike pursuit, but Bea had never been concerned by this. When she tipped her face to the heavens, she saw nothing but possibility. And it was so glorious it took her breath away.

At that very moment, in fact, the cumulus cloud at about one o’clock (assuming the church spire was twelve, and Bea always made the tallest structure twelve) looked rather like the Taj Mahal. Not that she had ever seen the Taj Mahal, or that she ever would, but she had seen a colored illustration of the magnificent Indian building, and surely that was enough to render judgment on a cloud.

Over at four o’clock she saw a teapot, and at six—

Bea snapped back to attention just a moment too late to avoid barreling into a gentleman coming the other way down the pavement. Her body connected with his with a breathsucking thud, and her reticule flew from her fingers, skittering a few inches along the cobbles when it hit the ground. Bea would have gone down, too, if a pair of large hands had not come to rest roughly on her shoulders, steadying her before she toppled over.

“I’m so sorry!” She snatched up her purse, thankful the clasp had remained fastened. “I was looking for a bench.”

“In the sky?” came the derisive response.

She felt her cheeks grow warm. He had her there. Still, he didn’t have to be quite so ungracious. “Of course not,” she muttered. “I was distracted, and, well…” She didn’t finish the sentence. What was the point? She cleared her throat and finally met the rude gentleman’s eyes. “Please accept my apologies. It was very careless of—”

My goodness. She blinked, so startled by his appearance that for a moment she could not speak. There was a patch over his right eye, but that was of little interest. Because the other one… his left eye…

It was the exact color of the sky. A little blue, a little gray.

More than a little stormy.

“I’m terribly sorry,” she said again, although honestly, who got that angry over a careless step? Had he never been jostled on the pavement before?

His lips pinched, and his brows —the same rich, dark brown as his hair— drew down. When he spoke, his tone was just as rigid as his expression. “Mind where you’re going next time.”

Bea felt her jaw grow stiff. “I shall.”

He stared at her for one last uncomfortable moment, then grunted, “Good day,” and stalked past.

“Good day to you, too,” Bea muttered to the empty space in front of her. Annoying man.

Then she turned. Because she couldn’t quite help herself. The insufferable man was striding down the street like he owned it, although maybe he did. She knew enough of men’s fashion to know that his boots and hat were exceedingly well-made. And as for his coat —all fancy blue superfine and shiny gold buttons— of a certain that had been constructed by an exclusive London tailor. No one else could have cut and stitched the cloth to so elegantly cover his muscular frame.

Which brought her to another point.

“Annoying man with annoyingly broad shoulders,” she muttered. How could it possibly be fair that the worst examples of humankind so often were the loveliest to look at?

With a sigh and a shake of her head, she carried on her way, eager to complete the rest of her errands. As if to mock her, the sixpence shifted in her shoe and dug in hard under her big toe.

“Really?” she said to her foot. If this was the sort of man the lucky charm was going to bring her, she was going to chuck the bloody thing in the lake.

is available in the following formats:

Not ready to order yours? Check out this story's overview. Read the excerpt. Listen to a bit on audio. There’s so much to love!

As an Amazon Associate I earn from qualifying purchases. I also may use affiliate links elsewhere in my site.