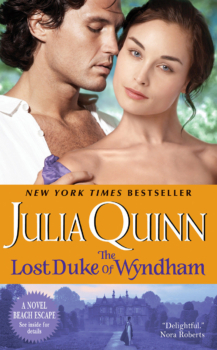 Deleted scene from The Lost Duke of Wyndham

Book 1 in the Two Dukes of Wyndham

Transitions are usually the hardest scenes for me to write. For example, I had enormous difficulty figuring out how to get Elizabeth and Amelia out of the action (and the carriage) once the dowager decided to kidnap Jack. In the end I decided I didn't need to actually show most of what happened, but not before I'd already written the following, which did not make it into the final book: ~JQ

“Turn the carriage around!”

“Ma’am!” Grace cried out in shock. But not really shock—it only sounded that way, because her voice didn’t know how else to sound. Grace, unfortunately, knew exactly what the dowager intended to do.

Elizabeth looked to her in panic. “Grace?” she implored.

“For the love of God,” Amelia snapped at her sister. “Be quiet.”

All eyes turned to Amelia, and for the first time in anyone’s memory, the dowager deigned to give her future granddaughter an approving glance.

But the approbation was short-lived, and before anyone had a chance to react, the dowager was reaching for the door handle. “Turn it around!” she demanded. “Grace, you get out and tell the driver to turn the carriage around.”
“Ma’am,” Grace pleaded, as if anything she said might dissuade the dowager from her plans. But all that earned her was a glare so furious that she hastily rose and moved toward the door. At that moment, however, the door opened, and the driver’s face appeared.

“Turn the carriage around,” the dowager immediately ordered.

The driver may have been officially in the employ of the Willoughby sisters, but it was easy to tell who was really in charge, and he made haste back to his seat. A minute later they were back at Belgrave, and Grace was being shoved out the door. She landed awkwardly, turning her right ankle. “Oh!” she cried, the sound escaping before she had a chance to temper her reaction.

“Are you hurt?” Elizabeth asked worriedly, moving to hop down after her.

“Get back into that carriage!” the dowager barked.

Amelia’s head appeared beside her sister’s, and although she did not look inclined to speak, she was clearly fascinated by the proceedings.

“Ma’am,” Grace pleased, half-hopping-half-walking toward her. “Ma’am, your grace, please. This is not a wise course of action.”

But the dowager was barking out orders, assembling what appeared to be a small army. Grace closed her eyes for a moment and shuddered. There would be no stopping her. She was determined to find her grandson, and heaven help them all if he didn’t wish to be found.

Grace opened her eyes and looked up. Elizabeth and Amelia had not changed position.

“What is she doing?” Elizabeth whispered.

“What are they still doing here?” the dowager demanded, throwing out one arm as she motioned toward their carriage. “Take them home at once.”

The driver obeyed with alacrity, and the carriage lurched forward with the girls still standing in the doorway.

“Ma’am,” Grace said, feeling more free to speak once Elizabeth and Amelia were gone, “please. You mustn’t do this.”

The dowager ignored her.
Grace moved forward and placed a restraining hand on her arm. “Ma,am,” she said again.

The dowager froze, then turned so slowly, and with such ice in her eyes that Grace felt her insides recoil and twist. She removed her hand.

“Get in the carriage,” the dowager said.

Grace looked at her in horror. The Wyndham carriage had been brought ‘round in record time.

Dedication for The Lady Most Willing…

Inside Lady Whistledown Strikes Back

Dedication for An Offer From a Gentleman