Julia Quinn Whatever Happened to the Ferret? - Julia Quinn 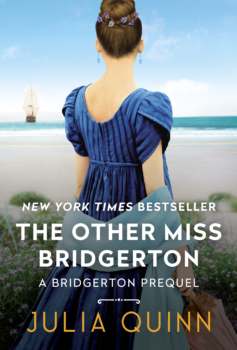 Whatever Happened to the Ferret?

Book 3 in the Rokesby Series

Or rather, exit the ferret, since—except for one tiny mention—it was edited out of The Other Miss Bridgerton.

Cue Andrew’s backstory in Chapter 3. If you haven’t read The Other Miss Bridgerton, I am not really giving anything major away here, but if you are a staunch No Spoilers type of reader, I recommend clicking off this page right here.

In their infinite wisdom, the members of the council had decided that the best place for a naval officer was a tiny landlocked principality in central Europe. Andrew was told—and this was a direct quote—to be “charming.” And to make sure that Wachtenberg-Molstein’s Princess Amalia Augusta Maria Theresa Josephine was delivered to London in one virginal piece as a potential bride for the Prince of Wales.

That she’d fallen overboard during the channel crossing was not Andrew’s fault. That she’d been rescued, however, was, and when she had then declared that she’d marry none but the man who’d saved her, Andrew had found himself at the center of a diplomatic disaster. The final leg of the trip had involved nothing less than a runaway coach, the disgruntled resignation of two sub-members of the council, and an overturned chamber pot. (On Andrew, not the princess, although you’d think it had been the latter from the way she’d carried on.)

It had been his sister-in-law’s favorite story to tell at dinner parties for years. And Andrew had never even told her about the ferret.

Now, with that kind of set-up, you might assume I was clear how the ferret figured into the story.

You would assume incorrectly.

But I was confident that the ferret’s backstory would come to me eventually, and indeed, I did my best to write it later in the book. It didn’t quite work, though, and so the ferret was (metaphorically speaking, I assure you) axed.

What you need to know is that at one point before the ferret was downsized, there were two princesses (or one princess and one countess, I hadn’t yet decided), and it wasn’t a chamber pot, but rather a soup tureen.

Here is an outtake that would have been part of some intimate post-coital pillow talk.

Poppy didn’t know much about military service, but she did know that one didn’t just get to leave when one grew tired of it. “How did you get out of your last two years of service then?”

Andrew was silent for a bit longer than she thought necessary for this question. “Well, there was this princess,” he said. And he smiled.

Poppy stopped drawing lazy circles on his chest with her finger. “A princess,” she echoed.

That halted her unfurling jealousy. “And a what?”

“The princess had a ferret in her valise?”

Andrew rose up on his elbow and looked at her. “Well, it was a different princess.”

Poppy hardly knew what to say. Finally she settled on: “And this ferret is why you left the navy for the War Office?”

He pushed a stray lock of her hair behind her ear, then leaned in to kiss her. “To be fair, it was really more because of the soup.”

“There was soup?” she asked, her voice squeaking a bit as his lips met her earlobe and began to trail down her neck.

Andrew sighed and drew back, and she saw the moment he realized he wasn’t going to kiss away this tale.

“It was a chaotic few minutes in an otherwise very tense diplomatic moment.” His tone seemed to indicate that he was repeating something he’d recounted several times before. “And when the ferret suddenly jumped out of a satchel— what? Is it really that funny?”

“What would you do,” he continued earnestly, “if a ferret suddenly jumped out of a satchel and looked to launch itself off of the end of a ladle sticking out of a giant soup tureen— What?”

She lost the battle, and a huge burst of laughter just snorted right out of her.

Andrew screwed up his own face and soldiered on. “I caught the flying soup ladle before it hit the princess in the face,” he said defensively. “Which I did think was rather well met, and then I whacked the ferret with it.”

“And then…” Poppy was laughing so hard she was having trouble breathing. “Oh my goodness, then what?”

“Then the whole soup tureen landed in the English princess’s lap, that’s what happened, and the ferret hit the German princess square in the chest, at which point the one screamed and the other fainted and— WHAT? You sound just like Billie telling this story. She can never finish it because she’s simply dissolved in big gales of laughter.”

And that, dear readers, is the untold, unfinished story of the ferret that only tangentially made it into The Other Miss Bridgerton. Alas, as I recount it to you, I realize that while I know that the ferret suffered no injury from Andrew’s inadvertent treatment of it, I don’t actually know what happened to the ferret after the soup ladle debacle. I shall leave that up to your imagination.

Enjoy another deleted scene, but from another author’s work! Eloisa James posted a deleted scene from Say No to the Duke on the very same day I posted this. I hope you enjoy! ~JQ

Inside The Duke and I

A Favorite Quote from An Offer From A Gentleman

The Cotler Prize, and a Scholarship Near to JQ’s Heart