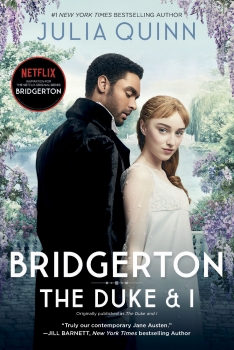 This essay first appeared at the end of the trade paperback edition (2019) of The Duke and I. This is a web exclusive.

In July of 1984 I was 14 years old and spending the summer, as I and my two sisters always did, in southern California with my father. There was always a big paradigm shift when we flew across country in June, moving from House of Mom in Connecticut to House of Dad in Los Angeles. My parents were not of the same mind when it came to reading matter. My mother pretty much didn’t care; she was busy holding down two jobs and if our noses were in books, she was happy, no matter what the genre. My father, however, saw things differently. He was a writer by profession, and thus spent a great deal of time pondering words, their meaning, and their potential value. So when it came to summer reading, he put forth such entertaining gems as The Count of Monte Cristo, Crime and Punishment, and Heart of Darkness. All wonderful and valuable novels, but hardly what a 14-year-old girl wants for her summer vacation.

We lived within walking distance of the public library — both my parents did; I suspect this explains a lot about my life’s trajectory — and I was delighted to see that our local branch had a robust collection of what I wanted to read: teen romances, specifically the Sweet Dreams series.

Sweet Dreams were the Harlequins of the adolescent set. Like all genre fiction, they were written with a clear eye to reader expectation. Girl meets boy. Stuff happens. Girl gets boy. It was not so much that the books were written to a formula (there’s a lot of variety within “stuff happens”) but there were clear parameters. The girl was always going to win in the end. She’d get the guy, and she’d do it by being herself. It didn’t hurt that the boy in these stories was frequently Mr. Popular while the girl was something of a wallflower. Heady stuff for a teenage girl who had been kissed exactly once (and by a summer camp guy, so it really didn’t count within the social hierarchy of high school.) Didn’t we always dream that the captain of the football team was secretly a bookworm and finally ready to see that the captain of the cheerleading squad was shallow and cruel? (My apologies to cheerleaders everywhere; I assure you that if I could have done a herkie jump, or even turned a cartwheel, I would have joined your ranks faster than I could read a Sweet Dreams romance, which was pretty fast indeed.)

But back to 1984. My dad was working from home, so there was no avoiding him, and he began to grow curious about my choice of books. He’s never been one to judge a book by its cover, so he picked one up and leafed through it. He was not impressed, but to his credit, he took a look at a second novel before making a judgment.

He was still not impressed.

I knew what was coming. And so when he asked me why I was choosing to read these books, I launched into a well-rehearsed speech about the importance of reading for pleasure. He agreed completely, he said, but he felt that I should be seeking more variety in my choice of books. He also didn’t see how I was deriving pleasure from books that to him, seemed to require no thought on the part of the reader.

“Give me one good reason why you should read these books,” he said. “Just one thing that you have learned or has made you think.” (It is important to note that when my father says, “made you think,” the italics are practically visible across his face.)

Try as I might, I could not make a convincing argument that my teenage romances were leading me to think deeply about the human condition. But I’m nothing if not scrappy, so I told him that I was increasing my vocabulary. He nodded. He could get down with this. So he asked, “Can you show me a word you’ve learned?”

I could not. Teen romances of the 1980s had many good features, but interesting verbiage was not one of them. 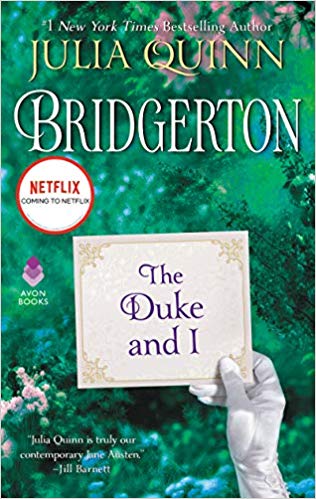 But I wanted to continue with my “fun” books, and I really didn’t want to spend the summer reading Joseph Conrad, so I said that my Sweet Dreams novels were research. I was going to write a teen romance novel, and it would be foolish of me to do so without a full understanding of the genre.

“Okay,” he said, and that night he sat me down in front of his computer. We were practically state-of-the-art for the early 1980s—the only house on the block with a personal computer. The screen was maybe eight inches across, black with a noxious green flashing cursor, but once I started typing I didn’t stop. I wrote a chapter. And then another. At some point my father came in to check on me, but I waved him away.

He never bugged me about my Sweet Dreams books again.

I share this story not because it is particularly relevant to Regency England (although it is certainly true that my teenaged heroine was, like Daphne Bridgerton, romantically overlooked by the opposite sex). Rather, I want you to understand the special bond I have with my father when it comes to the written word.

Flash forward to 1999. I am writing what I think will be the first book of a trilogy. I start with chapter one, even though I think there will probably be a prologue. I open with a mother and daughter, and I realize that in the course of their conversation, I, the author, need to impart a great deal of expository information. The daughter is the fourth of eight alphabetically named children, and the oldest girl. They all look rather alike. The father is dead, but the mother is not, and none of her charges are yet married. 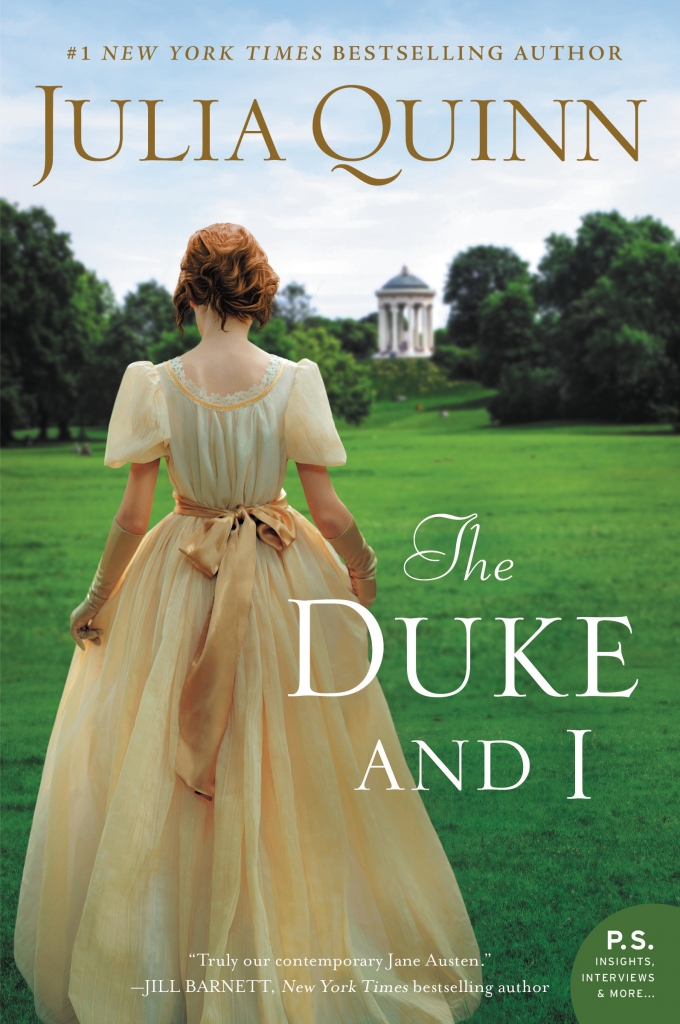 But how do I inform the reader? I don’t want to do what writers call an “info dump,” which is basically when the author dumps a whole lot of information into the opening chapter in an unnatural manner. My favorite (or rather, least favorite) example of this is when two characters have a conversation, but they are clearly talking to the reader and not to each other. If I were to do this in The Duke and I, it would come out something like this:

Daphne: Mother, did you ever think you would have eight children?

Violet: No, and I certainly didn’t think all eight would look so much alike.

Daphne: It does mean that people confuse us, but I suppose I have it easier than the others, since I’m the oldest girl.

Violet: Oh yes, I see what you mean. Eloise, Francesca, and Hyacinth will have to get used to the ladies of the ton mistakenly calling them by your name.

Daphne: It’s a good thing you named us alphabetically.

Violet: That was your father’s idea.

Yeah… that’s not going to work.

Then I realized that while it made no sense for Daphne and Violet to have a conversation in which they basically said stuff they both already knew, it was perfectly logical that a third party might impart that same information. If someone —perhaps a gossip columnist—were to gossip about the Bridgertons, it would make perfect sense that the basic facts of the clan would be laid out in a single, tidy paragraph. 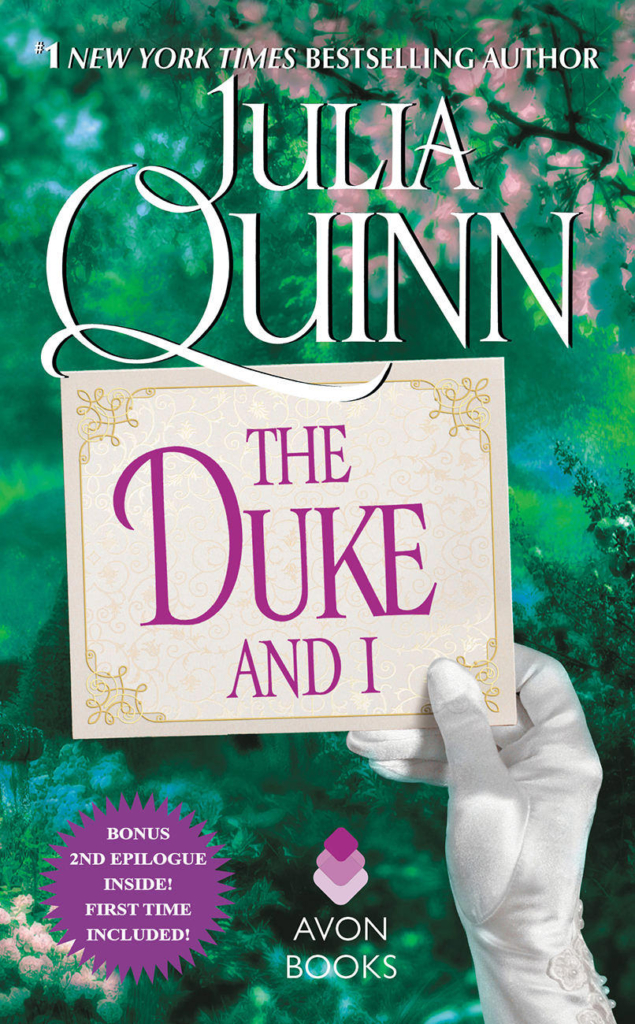 And so Lady Whistledown was born.

I loved her. She was arch and witty and cutting without being cruel, and she provided structure to the novel that would otherwise have been difficult to achieve. With Lady Whistledown we always knew what day it was. We knew what parties people had gone to. I could info-dump to my heart’s content and it would be entertaining. Honestly, it was a writer’s dream.

Until my father came to visit. (You knew we’d get back to him.)

I was puttering about in my kitchen, and all of a sudden he burst in and said, “You’re brilliant!”

I made a show of basking in the praise and then asked, “Why?”

It turns out I’d left my computer on in my office, and he’d read the first two chapters of what would eventually become The Duke and I. He immediately launched into an excited speech about what a great idea Lady Whistledown was, but he wanted to know— who was she, and how did I plan to reveal her?

I said, “You read it without asking me?”

I said, “I can’t believe you read what was on my computer without asking me.”

He blinked again and said, “But it was so good.”

This, apparently, was the right thing to say because I quickly forgave him. He said he hadn’t meant to read my work-in-progress. He’d gone onto my computer to check his email, and it was up on the screen and he got sucked in.

It turns out that it’s difficult to stay angry with someone when they tell you your writing has sucked them in.

But then he repeated his question. “Who is Lady Whistledown?” 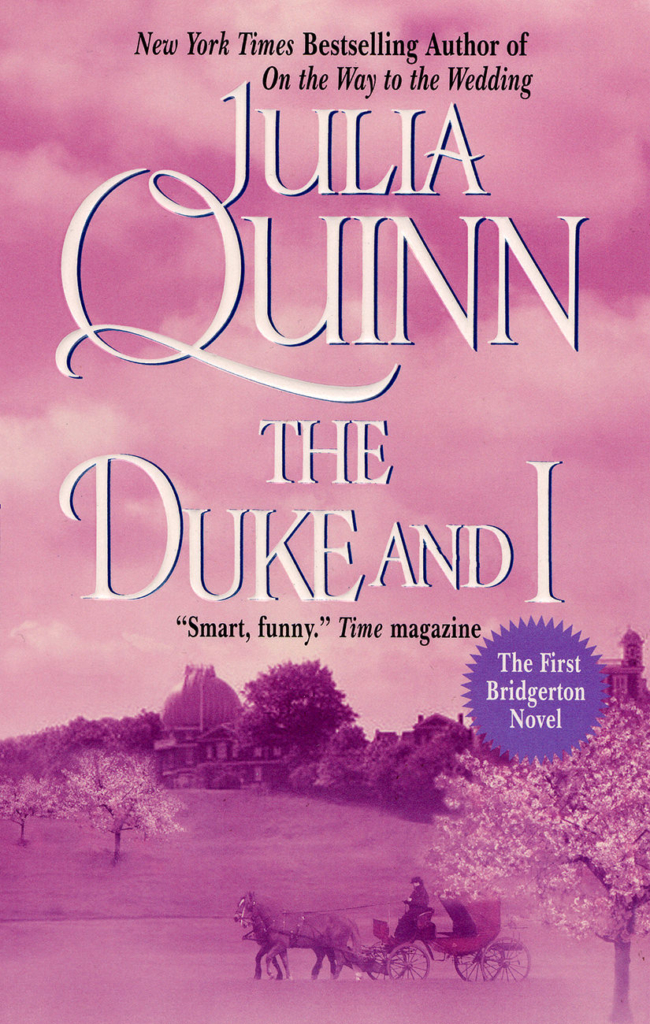 Dad: What do you mean you don’t know? You have to know.

Dad: You can’t write a mystery without knowing the answer.

Me: (With zero snark, I swear.) Apparently I can.

Dad: But you have to know who she is to write her columns properly.

Dad: (now pacing with distress) Oh my God. How are you going to do this? You have to figure it out.

Me: I’m hoping it will come to me.

Dad: What if it doesn’t?

Me: (for the first time starting to feel a little nervous) Uhhh… Drag it out to the next book?

If you’ve finished The Duke and I, you know that I did indeed drag it out to the next book, although not because I didn’t know who Lady Whistledown was when it went to press. I figured it out right around the time I started writing the next book in the series (The Viscount Who Loved Me) and then frantically reread The Duke and I to make sure I hadn’t written anything that would disqualify my candidate. 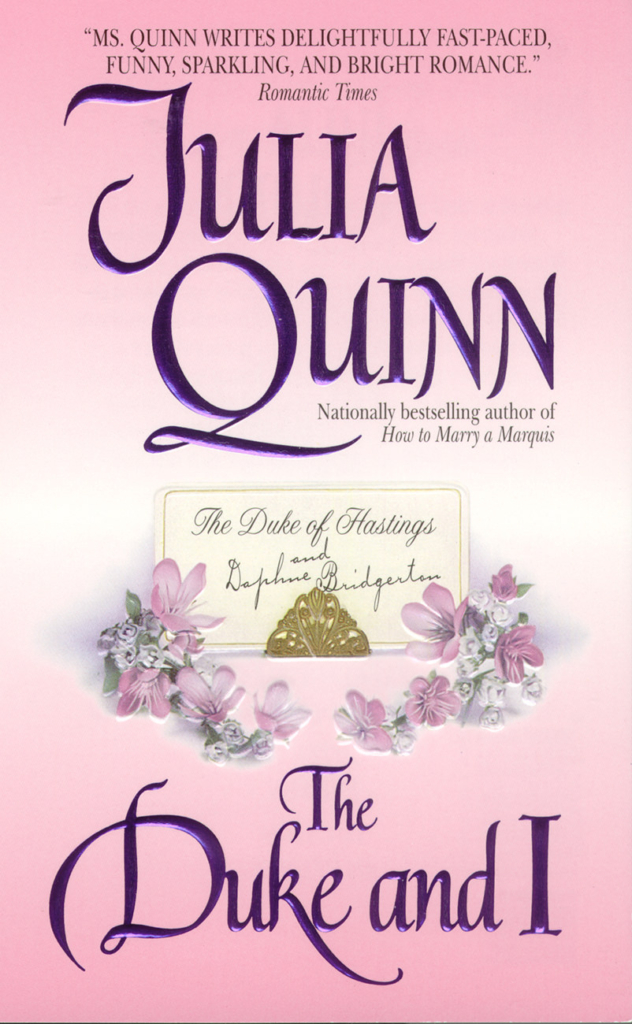 But when I failed to reveal Lady Whistledown’s identity, I did something that was somewhat unusual in my genre. Romance novels, by definition, have tidy endings. The protagonists have fallen in love, and their happily-ever-after is assured. Romance authors don’t write sequels so much as spin-offs, because if we bring our hero and heroine back as the main characters in a sequel, this implies that the happily-ever-after did not stick. If we write a series, every book must have a different set of protagonists. Readers expect this, and somewhere along the way they began to expect that all the major plotlines would be resolved by the final page.

When my readers finished The Duke and I, there was a collective jaw-drop. I had most definitely not resolved all the major plotlines. “Who was Lady Whistledown?” soon morphed into “Are we going to find out in the next book?”

Maybe I shouldn’t tell you now, but no, you won’t find out in the next book. I was having far too much fun writing the columns to say goodbye. But rest assured, Lady Whistledown’s identity does get revealed further down the series. And I think you’ll be cheering for her all the way.