You’re invited to the digital premiere of Queen Charlotte: A Bridgerton Story‘s teaser trailer — LIVE with Shonda Rhimes and much of the show’s cast.

When? Valentine’s Day, naturally. 10am EST/7am PST. But you must RSVP… 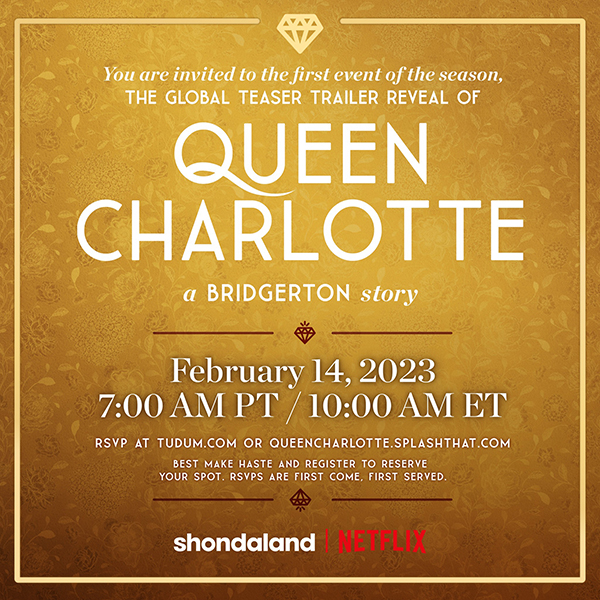 BREAKING NEWS! The prequel show that is coming soon to Netflix about young Queen Charlotte… The show Shonda Rhimes wrote… JQ is writing the novel!

What we know about the show: Centered on Queen Charlotte’s rise to prominence and power, this Bridgerton-verse prequel tells the story of how the young Queen’s marriage to King George sparked both a great love story and a societal shift, creating the world of the Ton inherited by the characters in Bridgerton.

~
QUICKLINKS:
about the Bridgerton books · where the books & the show come together
~

From the WilliamMorrow/Avon press release:

JQ: “Taking Bridgerton from book to screen was fascinating for me to watch, and it’s such an exciting challenge for me to take it in the other direction, this time crafting Shonda’s brilliant vision into a novel,” said Quinn. “I’m especially thrilled to have the opportunity to write about Queen Charlotte, who was not in the original novels. Her character —and Golda Rosheuvel’s brilliant portrayal of her— was a tour de force, and I think readers will love getting a chance to know her more deeply.”

Shonda: “Queen Charlotte has been such a moving character to write and now having the opportunity to work with Julia to adapt this story into a book is such an exciting opportunity,” said Rhimes. “I can’t wait for fans of this universe to read the story of a character that has resonated so deeply with our audience.”

WHEN WILL THE BOOK RELEASE? No date has been set yet, though WilliamMorrow/Avon stated in the press release: “the book will be timed to the release of the series on Netflix.” Nor has a title been announced. JQ promises: as soon as she knows, you’ll know.

How to feed your JQ cravings until we know more? We have NEW CONTENT on JuliaQuinn.com for you to indulge in:

→ Bridgerton Character Profiles with notes, photos, and lists (everyone loves lists!) cross-referencing characters to books — who shows up in whose story. May we suggest starting with Anthony? Or perhaps Penelope? Total rabbit hole!

→ New FAQ including: Are you going to write stories for Harriet, Elizabeth, and Frances Pleinsworth? And a question about tea.

Watch this space for more news about what’s coming soon, including: title and release date for JQ’s new book!

JQ talks about the inspiration behind Miss Butterworth and the Mad Baron, a graphic novel which is “a madcap romantic adventure complete with talking pigeons, a kind of inside joke for readers of the Bridgerton books.” It comes out on May 10, and is a collaboration with her late younger sister Violet Charles, a cartoonist.

Last summer Quinn’s sister and their father, Stephen Lewis Cotler, were killed by a drunk driver.

QUINN: “[This book] is a thing of joy to talk about because [Violet] was so, so funny, and it’s all her. She had the most absurd sense of humor, and it’s all there in the book. I feel like my last gift to her is to bring this out into the world with as much excitement and fanfare that I can…”

Happy Spring! Here is your first peek at Miss Butterworth and the Mad Baron, a BEAUTIFUL graphic novel coming out on MAY 10. Please enjoy these graphic excerpts illustrated by JQ’s younger sister, the wildly talented Violet Charles—preordering is available in ebook and print. Extra special opportunity: Get yours signed.

Netflix News! The Netflix Book Club, featuring The Viscount Who Loved Me starts streaming today. Join JQ and the incomparable Uzo Aduba as they take questions from readers, talk about Anthony’s story, and tease viewers about Season Two!

The trailer for BRIDGERTON Season 2 has arrived, and it is GLORIOUS. In the first 12 hours it clocked over 1M views on youtube alone.

If that weren’t enough to get excited about, did you hear that The Viscount Who Loved Me is this month’s pick in the Netflix Book Club? Julia Quinn sat down with host Uzo Aduba for a frank and funny conversation about our viscount, a corgi, and of course, The Mallet of Death. Stay tuned into all things JQ to find out when JQ’s episode of Netflix Book Club is airing!

The second season will premiere on March 25. 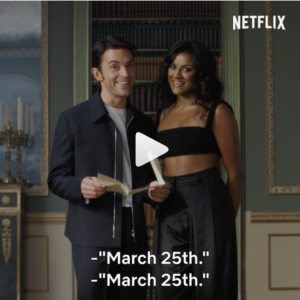 Mark your calendars! Bridgerton Season 2 will premiere on March 25, 2022.

Netflix announced this delightful news with an even more delightful video of cast members reading from a special edition of Whistledown.

Season 2 is based on The Viscount Who Loved Me, the second book of the Bridgerton series. Don’t forget to read before you watch…

You are cordially invited to glimpse the most romantic beauty collection of all time.

PAT McGRATH LABS is honored to join Netflix and Shondaland in an exclusive beauty collaboration inspired by the romance and passion of the Smash Hit debut season of BRIDGERTON.

When can you have this deliciousness? It all arrives 12.26.21. Join the waitlist now.

BRIDGERTON, Season One is streaming now on Netflix, and Bridgerton, The Series is available — all eight books in all reading formats for your instant gratification.

Get notified when these sets become available — join the Pat McGrath waitlist.

Netflix has released a teaser clip from Season 2 of Bridgerton! 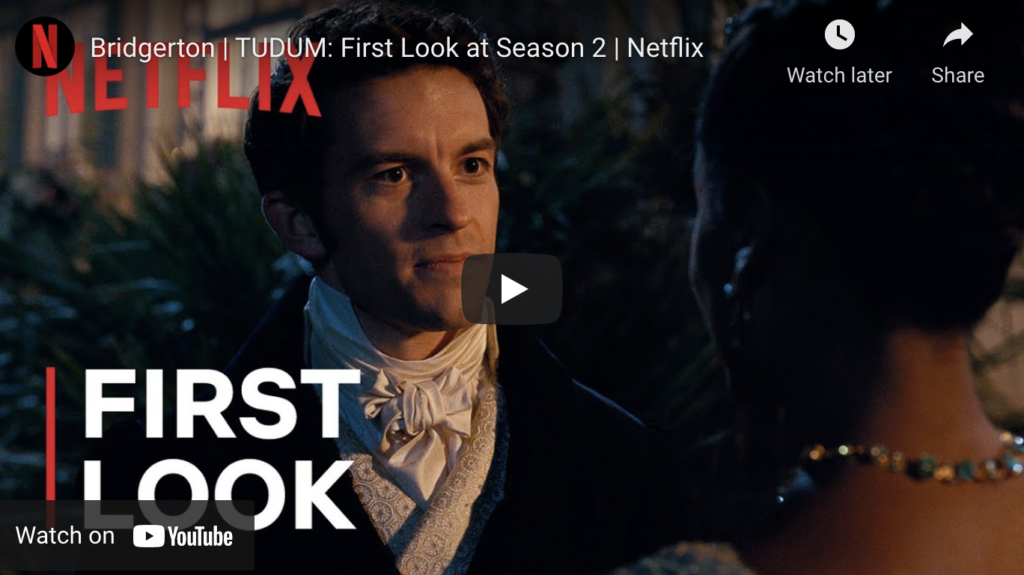 And if that’s not enough, we’ve also been treated to a few new photos from the set, and an extended version of the Bridgerton TUDUM panel starring Jonathan Bailey, Nicola Coughlan, Simone Ashley, and Charithra Chandran. 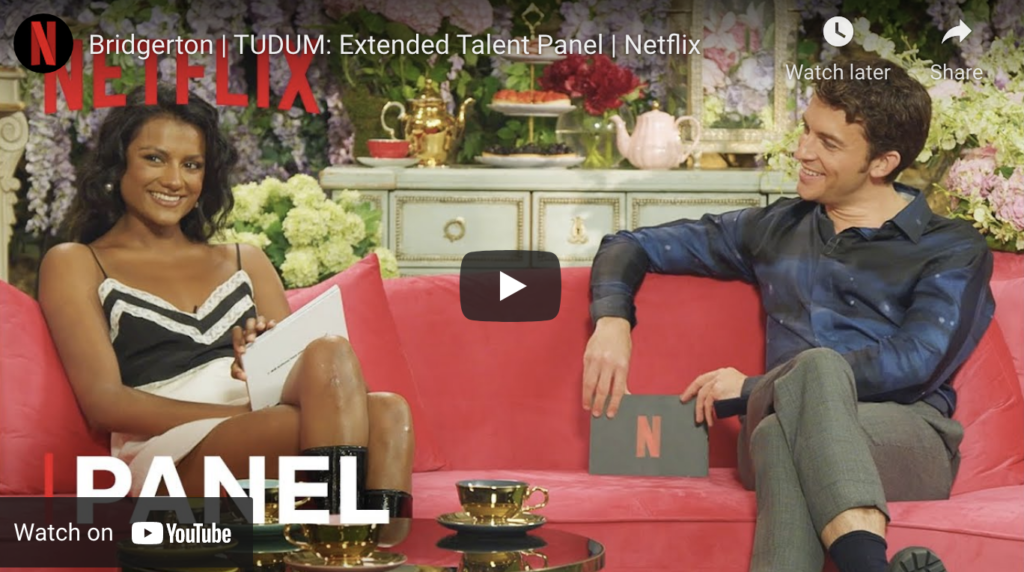 But in the meantime, why not read The Viscount Who Loved Me? Anthony & Kate’s story is available in all formats with the new cover — including autographed! 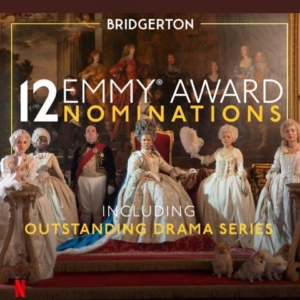 Outstanding Production Design for a Narrative Period or Fantasy Program

Outstanding Casting for a Drama Series

Outstanding Cinematography for a Single-Camera Series

Outstanding Music Composition for a Series