Julia Quinn The Bridgertons: Happily Ever After - Julia Quinn

The collection of Bridgerton 2nd Epilogues, plus the short story

Part of the Bridgerton Series

↓ jump to all ordering options ↓

Once upon a time, a historical romance author created a family…

But not just any family. Eight brothers and sisters, assorted in-laws, sons and daughters, nieces and nephews, (not to mention an overweight corgi), plus an irrepressible matriarch who’s a match for any of them… These are the Bridgertons: less a family than a force of nature. Through eight bestselling novels, readers laughed, cried, and fell in love. But they wanted more.

And so the readers asked the author…

What happened next? Does Simon ever read his father’s letters? Do Francesca and Michael become parents? Who would win in a Pall Mall grudge match?

Does “The End” really have to be the end?

Explore Inside this Story 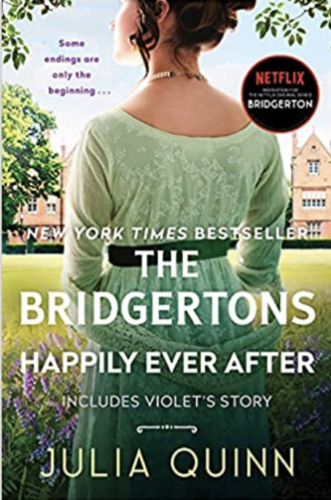 Add this book to Goodreads:

Books in this series:

Find out more about the Bridgerton Series → 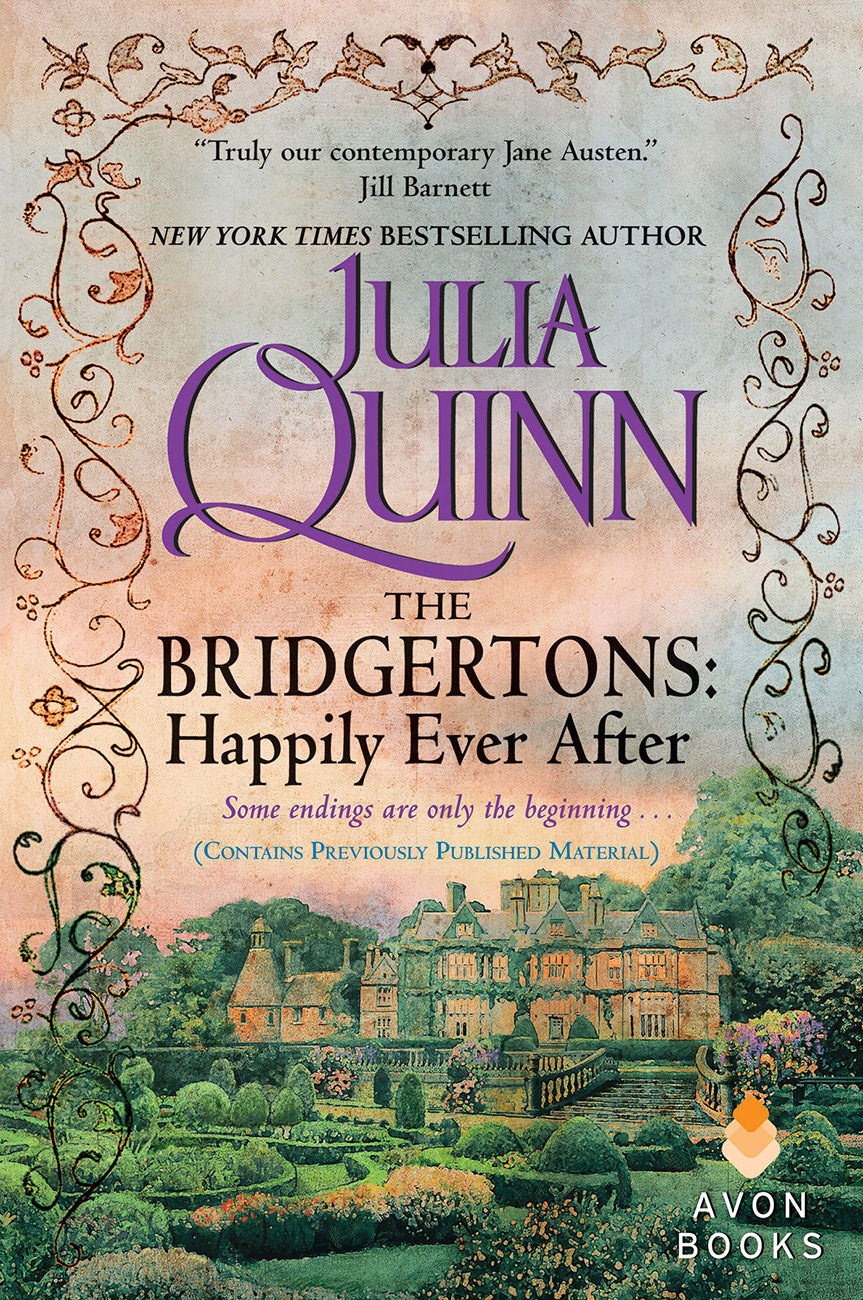 Have you ever wondered what happened to your favorite characters after you closed the final page? Wanted just a little bit more of a favorite novel? I have, and if my email from readers is any indication, I’m not the only one. So after countless requests from readers, I decided to try something a little bit different, and I’m thrilled to serve up The Bridgerton 2nd Epilogues—the stories that came after the stories.

The Duke and I

Midway through The Duke and I, Simon refuses to accept a bundle of letters written to him by his late estranged father. Daphne, anticipating that he might someday change his mind, takes the letters and hides them, but when she offers them to Simon at the end of the book, he decides not to open them. I hadn’t originally intended for him to do this; I’d always figured there would be something great and important in those letters. But when Daphne held them out, it became clear to me that Simon didn’t need to read his father’s words. It finally didn’t matter what the late duke had thought of him.

Readers wanted to know what was in the letters, but I must confess: I did not. What interested me was what it would take to make Simon want to read them…

Start reading from The Duke and I, Book 1 in the Bridgerton series.

The Viscount Who Loved Me

Without a doubt, readers’ favorite scene in The Viscount Who Loved Me (and perhaps in all of my books) is when the Bridgertons get together to play Pall Mall, the 19th century version of croquet. They are viciously competitive and completely dismissive of the rules, having long since decided that the only thing better than winning is making sure your siblings lose. When it came time to revisit the characters from this book, I knew it had to be at a Pall Mall rematch.

Start reading from The Viscount Who Loved Me, Book 2 in the Bridgerton series.

An Offer from a Gentleman

An Offer from a Gentleman is my homage to Cinderella, but it soon became apparent that the story had one too many wicked stepsisters. Where Rosamund was malicious and unkind, Posy had a heart of gold, and when the story reached its climax, she was the one who risked everything to save the day. It seems only fair that she, too, would get her happy ending…

Start reading from An Offer from a Gentleman, Book 3 in the Bridgerton series.

To say that a big secret was revealed in Romancing Mister Bridgerton would be a major understatement. But Eloise Bridgerton – one of the book’s most important secondary characters – left town before all of London learned the truth about Lady Whistledown. Many of my readers expected a scene in the next book (To Sir Phillip, With Love) that showed Eloise “finding out,” but there was no way to fit such a scene in the book. Eventually, however, Eloise would have to know, and that’s where the 2nd Epilogue comes in…

To Sir Phillip, With Love

Rarely have I written such meddlesome children as Amanda and Oliver Crane, the lonely twin children of Sir Phillip. It seemed impossible they could grow into well-adjusted, reasonable adults, but I figured if anyone could whip them into shape, it would be their new stepmother, Eloise (née Bridgerton) Crane. I had long wanted to try my hand at writing in the first person, so I decided to see the world through the eyes of a grown-up Amanda. She was going to fall in love, and Phillip and Eloise were going to have to watch it happen.

Start reading from To Sir Phillip, With Love, Book 5 in the Bridgerton series.

When He Was Wicked

I will confess that when I wrote the final words of When He Was Wicked, it didn’t even occur to me to wonder whether Francesca and Michael would have children. Their love story had been so moving and so complete that I felt I had closed the book on them, so to speak. But within days of the book’s publication, I began to hear from readers, and everybody wanted to know the same thing: Had Francesca ever had that baby she so desperately wanted? When I sat down to write the 2nd Epilogue, I knew that this was the question I must answer…

Start reading from When He Was Wicked, Book 6 in the Bridgerton series.

It’s In His Kiss

If ever there was an ending in one of my books that readers howled about, it was the one in It’s in His Kiss, when Hyacinth’s daughter finds the diamonds for which Hyacinth has been searching for over a decade… and then puts them back. I thought this was exactly what a daughter of Hyacinth and Gareth would do, and really, wasn’t it poetic justice that Hyacinth (a character whom I can only call “a piece of work”) should have a daughter who is just like her?

But in the end, I agreed with readers: Hyacinth deserved to find those diamonds… eventually.

Start reading from It’s In His Kiss, Book 7 in the Bridgerton series.

On the Way to the Wedding

When I write 2nd Epilogues, I try to answer readers’ lingering questions. In the case of On the Way to the Wedding, the question I heard the most post-publication was: What did Gregory and Lucy name all those babies? I’ll admit that even I don’t know how to craft a story revolving around the naming of nine infants (not all at once, thank heavens), so I decided to start the 2nd Epilogue right where the 1st Epilogue ends—with Lucy giving birth for the last time. And because everyone —even the Bridgertons— must face hardship, I didn’t make it easy…

Start reading from On the Way to the Wedding, Book 8 in the Bridgerton series.

Romance novels, by definition, wrap up neatly. The hero and heroine have pledged their love, and it is clear that this happy ending will be forever. This means, however, that an author can’t write a true sequel; if I brought back the same hero and heroine from a previous book, I’d have to put the previous happy ending in jeopardy before assuring them of another.

So romance series are instead collections of spin-offs, with secondary characters returning to star in their own novels, and previous protagonists popping by occasionally when needed. Rarely does an author get the chance to take a character and watch her grow over many books.

This was what made Violet Bridgerton so special. When she first appeared in The Duke and I, she was a fairly two-dimensional, standard regency mama. But over the course of eight books, she became so much more. With each Bridgerton novel, something new was revealed, and by the time I finished On the Way to the Wedding, she had become my favorite character in the series. Readers clamored for me to write a happy ending for Violet, but I couldn’t. Truly, I couldn’t—I really don’t think I could write a hero good enough for her. But I, too, wanted to learn more about Violet, and it was a labor of love to write. 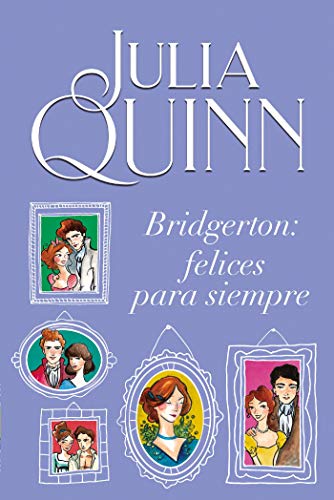 Not ready to order yours? Check out this story's overview. Read the excerpt. Listen to a bit on audio. Find out more about the series. There’s so much to love!

As an Amazon Associate I earn from qualifying purchases. I also may use affiliate links elsewhere in my site. 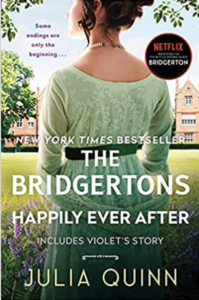