Signup to Get JQ's News & Updates Via Email →

New in ebook! Now you can get all of your Bridgertons bundled!

Buy your copy of Volume 2!

Bridgerton Collection Volume 3 has the final two books of the series: It’s in His Kiss (Hyacinth & Gareth) and On the Way to the Wedding (Gregory & Lucy), books 7 & 8 of the Bridgerton series, plus the first book in the Bridgerton Prequel Rokesby series: Because of Miss Bridgerton (Billie & George), book 1 in the Rokesby series.

Buy your copy of Volume 3!

And don’t forget about all those new formats and covers for the individual Bridgertons — those details are spelled out on the JuliaQuinn.com Coming Soon page.

The Bridgerton Series is getting a makeover, with new US editions of books 2-9 hitting stores throughout 2021. Brand new covers and never-before published formats: hardcover, trade paperback, and the new mass market MAX for Anthony, Benedict, Colin, Eloise, Francesca, Hyacinth, Gregory, and the Happily Ever After Collection that includes the novella “Violet in Bloom.”

The new covers are already available in eBook format! The first of the trade paperbacks (aside from The Duke and I, which has been shipping since last December) will become available at the end of April. The first hardcovers go on sale a week later, and the rest will pepper the rest of this year. We’ve created a handy guide with all the dates. And yes, all are pre-ordering! 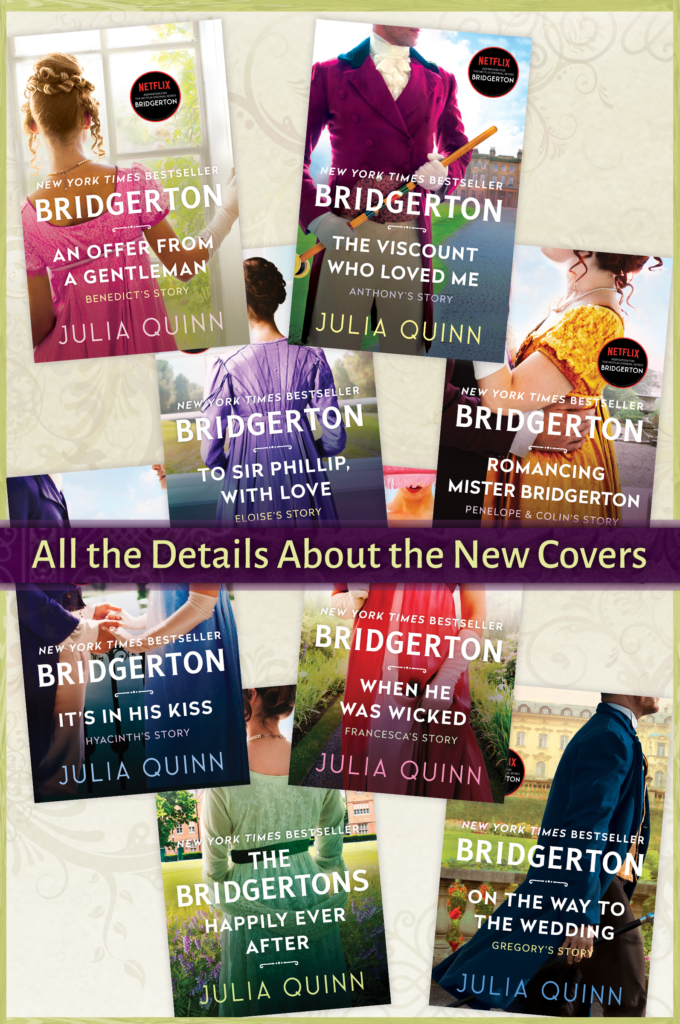 More BRIDGERTON! Go behind the scenes with the Official Bridgerton Podcast! Episode 1 published last week, Episode 2 just dropped. Several more episodes are planned — all about season 1 of the hit show, based on The Duke and I.

Episode 2, “The Reason for the Season,” explores the marriage market. FUN! Featuring cast and crew — and JQ herself, thankyouverymuch — the Official Bridgerton Podcast talks about how the show was created, discusses the storyline, music, the costumes and sets, the historical context of the era and so much more! JQ couldn’t be more excited about it.

Want even more backstory? There is much right here on JuliaQuinn.com to explore including an essay about how JQ created Lady Whistledown, Behind the Scenes for all her books, and mugs!

“Aren’t they splendid?” (<— TeamJQ thinks that is what Lady Whistledown would say!)

Impt Fine Print: Bridgerton: The Official Podcast is a production of Shondaland Audio in partnership with iHeartRadio. Listen and subscribe at Apple Podcasts or wherever you listen to your favorite podcasts.

As reported in Deadline, Simone Ashley has been tapped to play Kate Sharma (Kate Sheffield in the books), the female lead opposite Jonathan Bailey’s Anthony Bridgerton in season two of Bridgerton.

Newly arrived in London, Kate is a smart, headstrong young woman who suffers no fools — Anthony Bridgerton very much included. Their love story is chronicled in the second book of the Bridgerton series, The Viscount Who Loved Me.

Julia Quinn will be making an appearance on the 3rd Hour of Today, recommending five of her favorite reads! Tune in to see which books are behind the hearts… 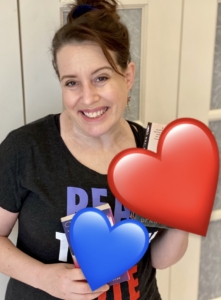 Also, don’t forget: If you’re still trying to get your hands on paper copies of JQ’s books, we recommend ordering from her hometown bookstore: University Book Store. They get regular shipments of all her titles, and bonus: all books come autographed! 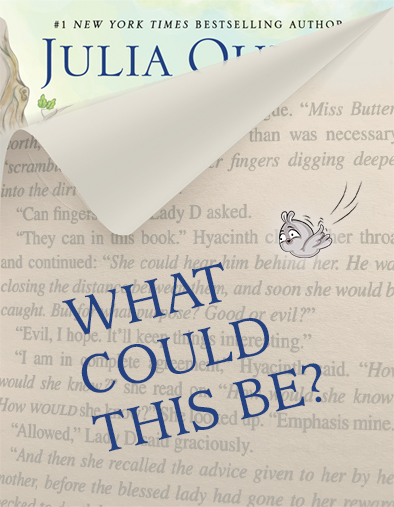 Miss Butterworth and the Mad Baron! We’ve released the cover on social media and via the JQ Newsletter, and now it’s here on JuliaQuinn.com along with preorder links! 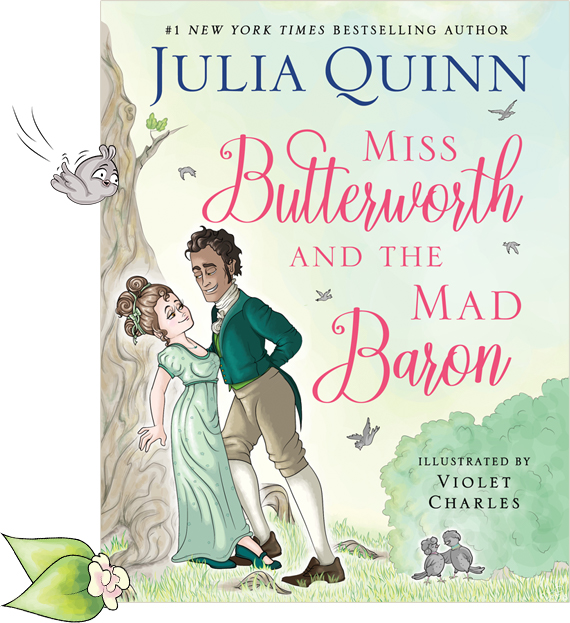 Please note that while autographed copies will be available through University Book Store, they are not yet taking orders. But don’t worry, we’ll let everyone know as soon as it’s possible to reserve your autographed copy.

It’s official! Netflix has renewed BRIDGERTON for a second season! 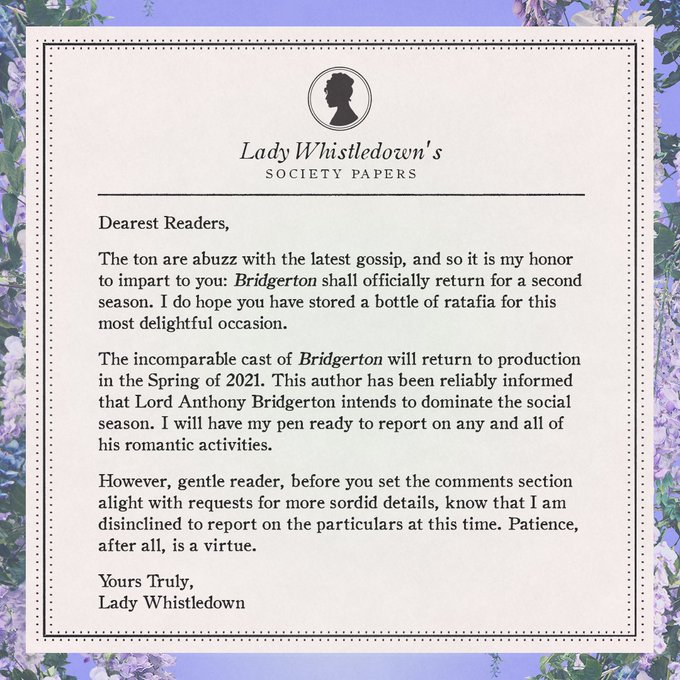 It’s thrilling! So many new-to-JQ readers put three books: The Duke and I, The Viscount Who Loved Me, and Romancing Mister Bridgerton on the New York Times bestseller list — with The Duke and I holding the top slot for three weeks running! And ten — TEN! — titles on the USA Today list. That’s an exciting lot of new Bridgerton readers. How long until they discover the prequels? The romance of Violet & Edmund’s generation await readers with the Rokesbys… 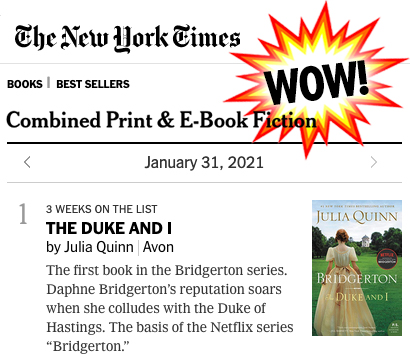 It’s fun! With all the Bridgerton love going around, JQ is on Cloud Nine! 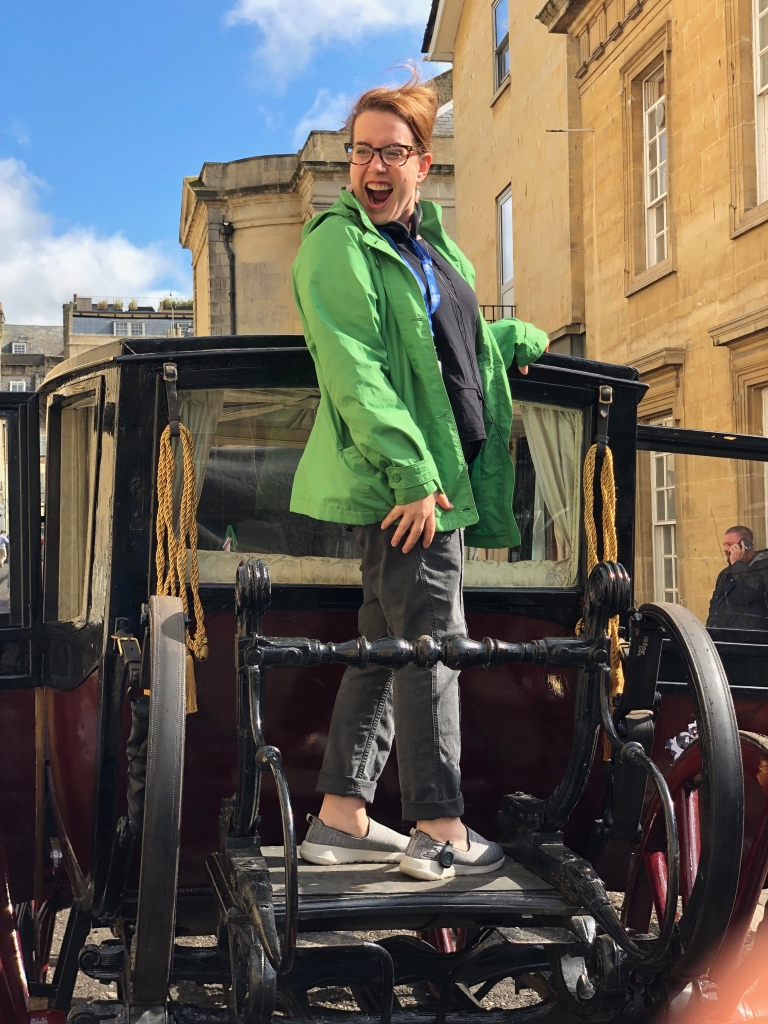 First Comes Scandal, a Bridgerton prequel in which Anthony and Benedict Bridgerton appear as spirited little boys, and readers are treated to Violet and Edmund as young parents, was named one of Amazon’s top books for 2020! It was even featured on a massive billboard near New York’s Penn Station. 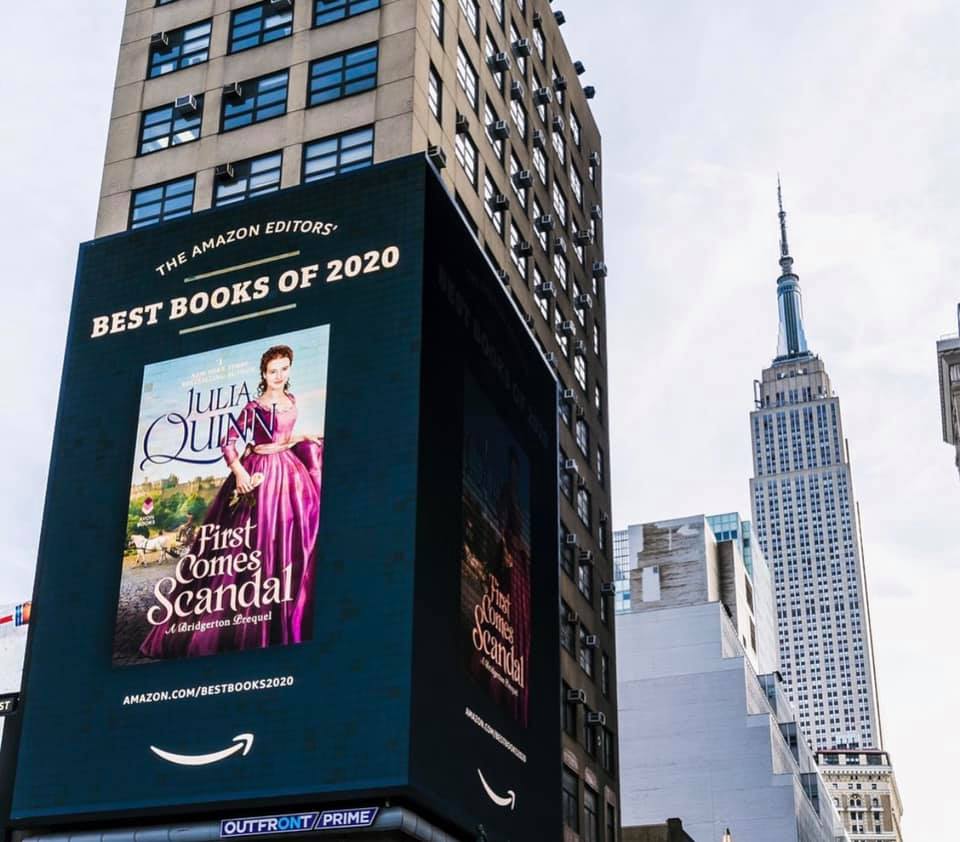 New from JQ: her Inside the Story for First Comes Scandal is brand new on JuliaQuinn.com. Find out more about baby Colin (who steals much limelight), about Cat-Head (who causes much mayhem), and about the medical school Nicholas attends (which has a history JQ loved diving into).

Read the beginning of First Comes Scandal, and if you haven’t read this delicious Bridgerton prequel, download it or order it today!

Finally, if you’ve been trying to get your hands on paper versions of JQ’s books, rest assured, her publisher is printing them as fast as they can. JQ recommends ordering from University Book Store in Seattle. They’ll be autographed (and personalized, if you want!), and because UBS is JQ’s official bookstore, they have priority and will get more copies as soon as they’re available. 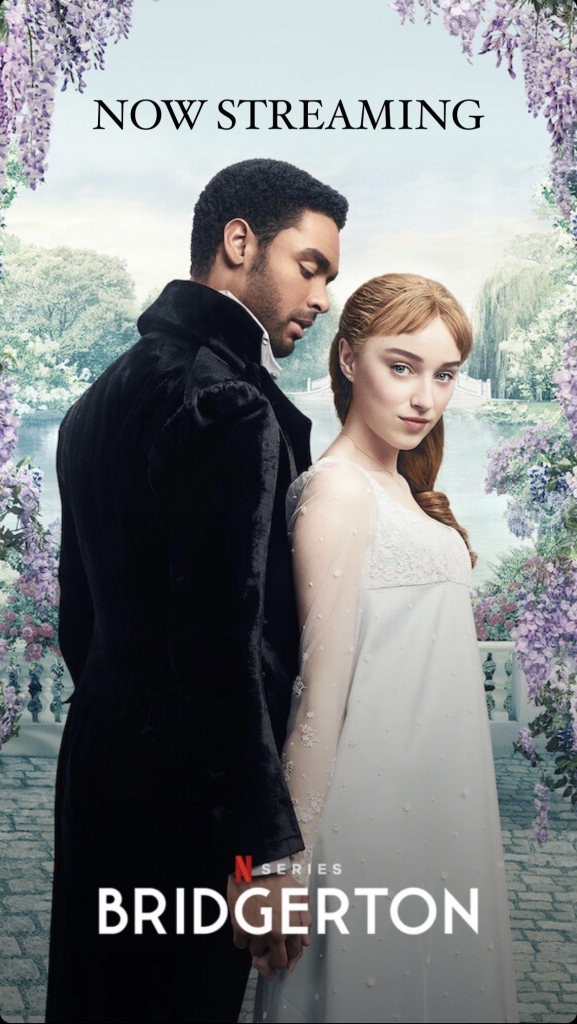 Visit the page where the books and show meet →